Its original habitat may have been along the Nile and other parts of East Africa. It spread more widely in ancient times, including to the Indian Subcontinent, especially Sri Lanka and Thailand.

We source our flowers from lakes in Sri Lanka where they naturally grow in the mud. No fertilizers or pesticides are used. All the flowers are dried by using shaded sun light. We do not use artificial heat to dehydrate.

The sacred water lotus has been used in the Orient as a medicinal herb for well over 1,500 years, and is also an important religious, artistic, and folklore icon. It was brought to India from Egypt, where it was associated with the sun: the lotus. Like the sun, it opens in the morning and closes at night. It is also associated with the god Horus, who was often depicted sitting or standing on the lotus, like Brahma and the Buddha after him. In Egypt the flower was blue and white, and was seen as a flower of resurrection, and used in funeral rights and depicted in the artwork in tombs. In India it represents birth and rebirth; Brahma was born seated on a lotus flower.

The flower petals and leaves are typically made into a tea or decoction for internal  or external use. Often use for lucid dreaming.

They may also be used as a garnish, smoked, floated in soups, and the fresh petals are used as a wrap in Asia. It is also said that the petals steeped in wine or tea have a calming effect.

Available in 10 grams or 30 grams, comes in a jar or brown bag (no plastic/zero waste)

Using the Sacred Blue Lotus I just received form cosmic bazaar. It has opened and cleared my lucid dreams. I have been able to see everything clearly.

thank you for these sacred petals, just a few added to tea is potent heart warming medicine. I really appreciate that they are packed without plastic x

firstly i love the packaging -zero waste and the cute notes left from cosmic bazaar <3
the 15g is such a generous amount and the flowers themselves are so so beautiful ! i HAD to come leave a review here.
i love the way they taste both through the smoke and the tea, however i myself am an herbalist and have a strong keen and threshold for these types of tastes. for those that don’t, i’d suggest adding lavender to your joint.
relaxation is on point, as well as slight euphoria. the clarity it provides transcends the dream realm however that realm is also quite vivid. actually does promote lucidity especially if you’re in tune and observant of events

I received my Blue Lotus flowers in Johannesburg, less than two days after I placed my order.
Very impressed with Cosmic bazaar's service and quality.

I'm stoked about my Sacred Blue Lotus Purchase. I didn't know what to expect but fortunately I'm thrilled with what I got. I'll be ordering from Cosmic Bazaar again! 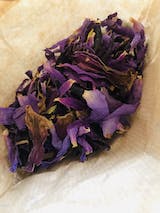 So glad to have been able to find this!! Next level dreams and relaxation. Stunning to look at :)
Made me fall asleep with ease and had some cool dream recall.
Looking forward to exploring more ways in which I can benefit from this stunning herb :D

Been vaping the blue Lotus before bed, amazing dreams. as good as the African dream root.